We start out by meeting up with the band, apparently they are huge fans of you.  Myron Wagtail is the lead singer, Kirley plays guitar, and Orsino is on the drums.  After a short talk you will be directed to meet Myron in the Hospital Wing. 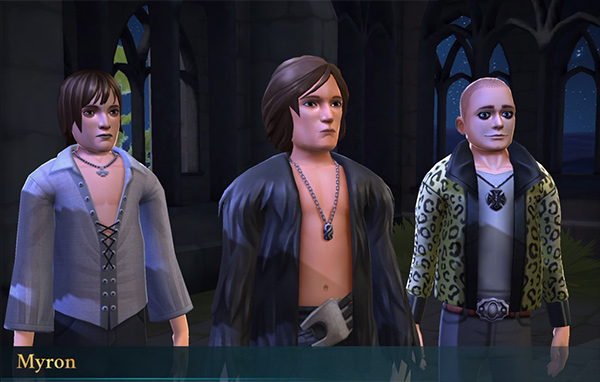 Turns out The Weird Sisters are fans of a lot of your friends.  Ben Copper is in the Hospital Wing with the band and they just love his “hopeless melancholy”.  This meeting is followed by a 1 hour activity that requires 1 star to complete, but has a potential 5 stars.

Next meet up with the band in potions classroom.  Your next target for inspiration is Professor Snape himself.  The band things that Snape  is the perfect subject to understand tragedy and brooding.  After a short conversation you will endure a 1 hour activity which requires all 5 stars in which Snape will repeatedly insult The Weird Sisters.

Following this is a lesson in pain in the Great Hall.  There you will have lunch with Ismelda Murk who the band is also infatuated with due to her “endless darkness”.  This conversation will lead to a friend activity with Ismelda where you will have to select answers to impress her with your wickedness!  Ismelda has 8 of each attribute point here, I’ve managed to find the following possible questions… Answers in green are worth 10 points while answers in yellow are worth 5.

Would you use the Killing Curse?
That’s how I start every morning.
or
Only on my enemies.

Where will you live after school?
Knockturn Alley.
or
Nurmengard.

What if I was a Dementor?
I’d Flipendo your nonexistent face.
or
I’d hang out with you in Azkaban.

Would you join the Death Eaters?
I would rule over them.
or
I would kill all of them.

Answer enough questions to fill up the 3 diamonds and you will complete Part 1 of the Weird Sisters adventure.  500 Gold will be rewarded here.

Part 2 begins with meeting Myron in the Corridor where you will search for suitable props and artefacts for the show.  This is a 3 hour activity which requires 1 star to complete, there are 5 potential stars to earn of course.  This is a good time to recharge some energy as the next activity will require all 5 stars to complete.

Now head to the Artefact room with Myron and destroy some stuff to get the attention of a surprise guest.  This is a 3 hour activity which requires all 5 stars. 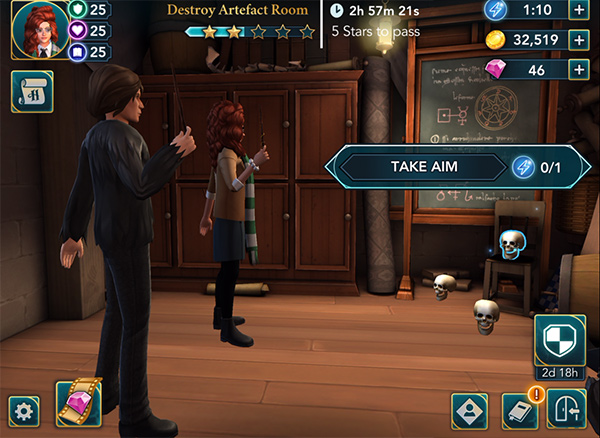 Turns out the mystery guest is Peeves.  Myron need him to distract Filch and the teachers in order to get the rock concert set up.  Peeves will agree after some persuasion, but Professor Flitwick will show up and demand and explanation for the damage.  Make up some excuse and walk away with only a small loss in house points.

The band is now waiting in the Potions classroom to teach you about a pre performance ritual they engage in.  Complete a 1 hour activity which requires all 5 stars to continue.  The ritual just involves the band casting cheering charms on themselves and hanging out.  This leads to an opportunity to share your crush with the Weird Sisters.  Choose between Bill Weasley and Penny Haywood or simply refuse to say. 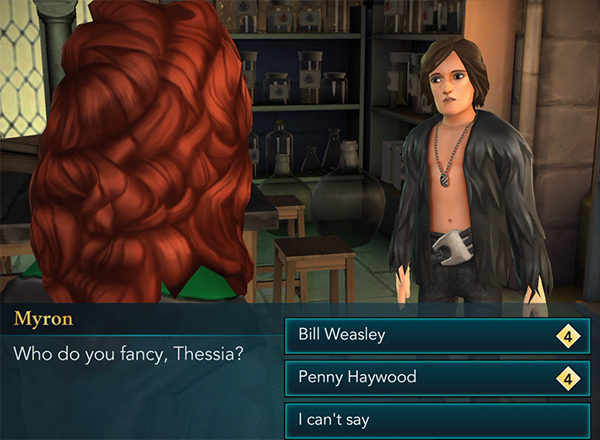 This ends Part 2, you will be rewarded with 5 Gems for your efforts.

Find a way to get rid of Filch in part 3 as Peeves is only able to distract the teachers.  Myron heard that you and Penny once brewed a sleeping potion to get rid of Mrs. Norris.  He figures you can brew one to use on Filch.  The sleeping draught is brewed during a 3 hour activity which requires all 5 stars to complete.

Next you can choose Penny Haywood, Ben Copper, or Ismelda to help spread word of the concert.  Whoever you chooses will help make fliers and hand them out to classmates.  This is a 3 hour activity which requires only 1 star to complete.  A good time to recharge some energy! 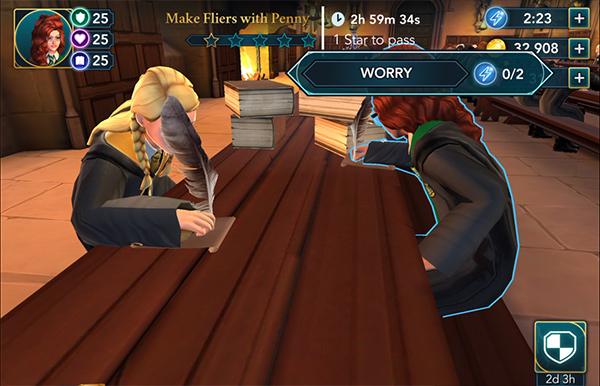 Now head back to the potions classroom and meet up with the Weird Sisters again.  They want you to brew a fire breathing potion for some theatrics during the show.  This is another 3 hour activity which requires all 5 stars to complete.

With the fire breathing potion complete the show is almost ready.  The only thing left to do is to learn an instrument.  Easy enough…

This ends part 3, 10 gems will now be rewarded.

Start off Part 4 of the Weird Sisters adventure by heading to the Transfiguration classroom to get an instrument.  Professor McGonagall has apparently taught the entire band to transfigure a cauldron into a bass guitar.  Go ahead an choose a cauldron to transfigure…  This is a 3 hour activity which requires all 5 stars. 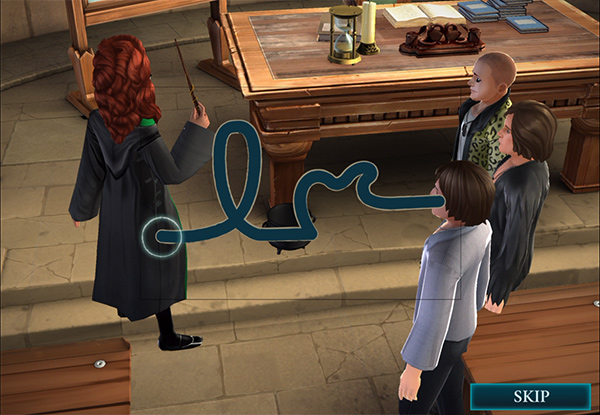 Now that you have your Bass Guitar you will have to actually learn how to play it.  Unfortunately no spell exists to instantly learn to play an instrument, so you will instead have to charm your guitar to play itself.  This is another 3 hour activity which requires all 5 stars to complete. 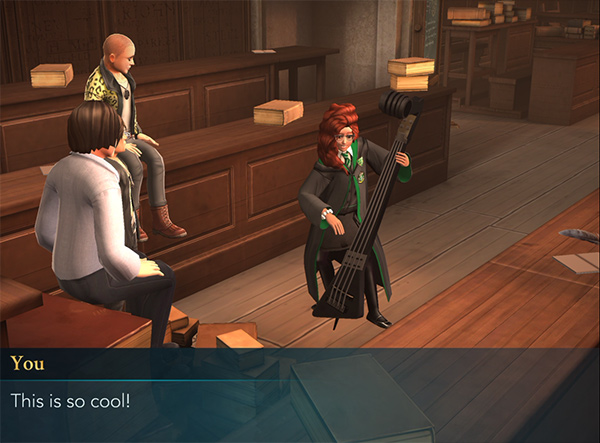 At this point everything is ready for the show.  Go play the greatest concert in Hogwarts history… this is an 8 hour activity which requires all 5 stars. 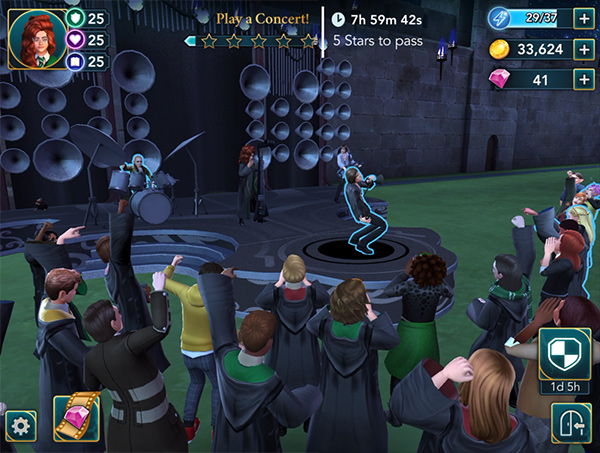 After the show you will receive a special cosmetic clothing reward from The Weird Sisters in addition to a black quill containing a clue to your brothers location. 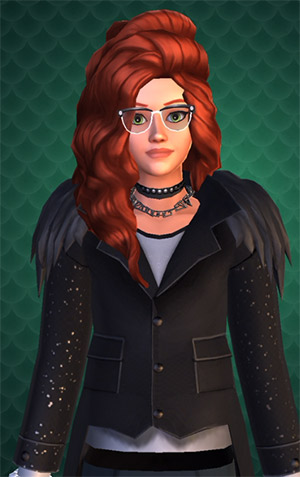