History of Magic is unlocked in Year 5 of Harry Potter: Hogwarts Mystery.  The class is taught the ghost of Professor Binns and is notorious for being the most boring class in Hogwarts.  This is reinforced when Binns falls asleep almost immediately after the start of your first class.

Multiple familiar characters from the book series make an appearance in History of Magic.  There will be lectures from Nearly Headless Nick, a portrait of Rowena Ravenclaw, Nymphadora Tonks, Rowan Khanna, and even Peeves.  However most students will spend time goofing off as Professor Binns sleeps or remains completely oblivious.


History of Magic will reward the Knowledge attribute and is a bit different than the other classes. There is no shape tracing minigame.  The expanding circle mini-game is replaced with the Sense Hexes activity (as seen in Defense Against the Dark Arts) which involves tapping to screen at a steady rate to lift a scroll into a specified area.  And the majority of the time you will be answering a History of Magic specific question.  For example an 8 hour class will generally feature 4 questions and 1 Sense Hexes mini-game. 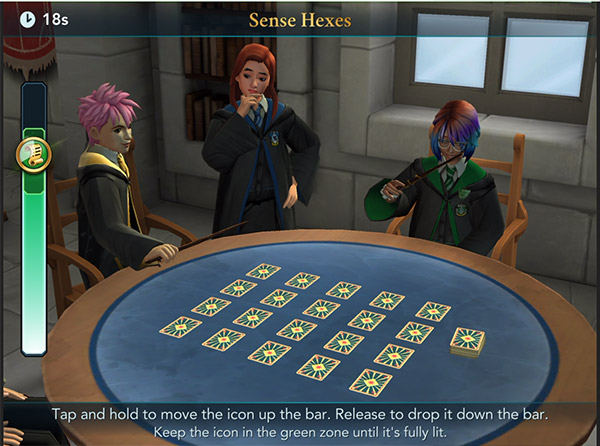 Tapping or holding a finger on the screen will raise the scroll, the speed at which it raises depends on how rapidly the screen is tapped.  You will want to tap the screen at just the right rate to keep the scroll within the green marked area, keep it there for 5 seconds and you win.  There is a 30 second time limit on completing the Sense Hexes activity.

As always, answers in green are correct.

What color does the presence of a ghost turn flames?
Blue

When was the Werewolf Code of Conduct developed?
1637

The Medieval Assembly of European Wizards gives out which award?
Bravery Against Fantastic Beasts Award

The Medieval Assembly of European Wizards is related to which convention?
International Warlock Convention

What trait did Salazar Slytherin value most in a student?
Cunning

What followed the Soap Blizzard of 1378?
Wizarding Economic Bubble Burst

What is my signature item? (Rowena Ravenclaw)
Diadem

I am the patron ghost of which House? (Nearly Headless Nick)
Gryffindor

Who was the first Quidditch referee to die in a Quidditch match?
Cyprian Youdle

Which Minister for Magic resigned following the goblin rebellion of 1752?
Albert Boot

Where was Beedle the Bard born?
Yorkshire, England

I am a giant fan of what? (Peeves)
Pranks

Why did the Werewolf Code of Conduct fail?
No Werewolves signed it

Which is NOT a reason for a wizard to remain on this earth as a ghost?
Hunger

When was the Golden Snidget first introduced into the game of Quidditch?
1269

Emeric the Evil was killed in a duel against whom?
Egbert the Egregious

Who was the original owner of the Sorting Hat?
Godric Gryffindor

When did the wildcat gargoyle strike take place?
1911

When did my fellow Founders and I found Hogwarts? (Rowena Ravenclaw portrait)
10th Century

When was the first full description of the game of Quidditch written?
1398

Which wizard used the Tarantallegra spell to in 79 AD conjure a dance within Mt. Vesuvius?
Zaccaria Innocenti

What trait do I value most in a student? (Rowena Ravenclaw portrait)
Intellect

Where did the Goblin Rebellion of 1612 take place?
Hogsmeade Village

What am I most known for? (Nearly Headless Nick)
My partially severed neck

Who was the first minister of magic?
Ulick Gamp

Whose teeth did I accidentally turn into tusks, leading to my death? (Nearly Headless Nick)
Lady Grieve

Peevesy is a what?
Poltergeist