Check out the Flying Solo Adventure to help out Talbott and ultimately gain him as a friend!

Something is wrong with Talbott Winger… help him out in this 4 part adventure to gain him as a friend.  Flying Solo becomes available in Year 3.

Part 1 is split into 4 tasks and will reward some gold on completion.

Begin the Flying Solo adventure by meeting Penny Haywood in the Great Hall, she seems concerned about Talbott Winger. He’s been even more of a loner than usual and has even been missing class lately.  Ask around the Great Hall in a 3 hour activity which requires only 1 star to complete.

Unfortunately nobody in the Great Hall has seen Talbott recently.  Agree to help Penny look around for Talbott. 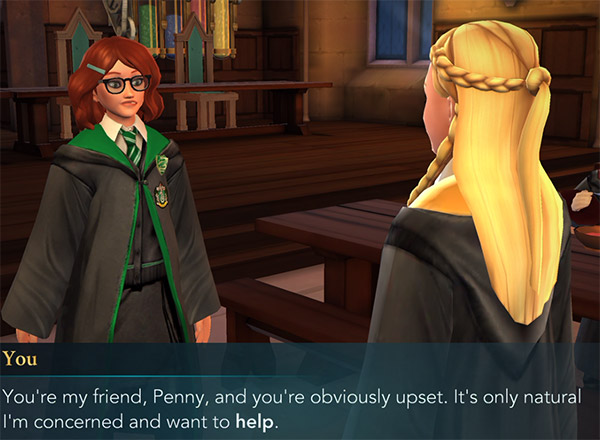 Head to the Courtyard where Talbott has agreed to meet you.  He heard that you and Penny were looking for him.  He’s unwilling to talk, so challenge him to a game of Gobstones to convince him to talk.

Beat Talbott at Gobstones by answering the following questions:

I’ve been practising Gobstones.
I’ve been spying for the Ministry +10
or
I’ve been bird watching. +5

I’d rather just keep to myself.
I’d rather report you to the Ministry. +10
or
Id rather eat giant sandwiches. +5

Just as Talbott is about to talk he senses Merula sneaking around and reveals her invisibility charm.  He’s a bit upset that Merula heard he was an unregistered Animagus, confront Merula and convince her to keep his secret.

Confront Merula in the Potions Classroom.  You’ll have to convince her to tell you what she heard about Talbott… after some talking she will finally agree to talk if you help her study.  Do this in a 1 hour activity which requires all 5 stars to complete.

Merula will admit she was listening in, but only because she thought he had info on the Cursed Vaults.  She wasn’t spying.. just keeping an eye on the competition.  She doesn’t quite agree to keep his secret of being an unregistered Animagus to herself.

Meet Talbott in the Three Broomsticks to talk.  Convince him that you can help deal with Merula since it’s at least partially your fault she knows.  Persuade Talbott by answering the following questions:

I don’t work well with others.
Our Animagus Potion went well. +10
of
Have you ever really tried? +5

I don’t need help.
Everyone needs help sometimes. +10
or
Sure you’re not lying to yourself? +5

After answering enough questions you will be rewarded with 225 experience.  Talbott decides he wants to Obliviate Merula, and figures Professor Flitwick can teach you.

This ends part 1 of the Flying Solo Adventure, you will be rewarded with 350 gold.

Part 2 is split into 4 tasks… Having convinced Talbott to let you help him, you work to keep his secret safe and get him to open up.

Go to the Charms Classroom and try to convince Professor Flitwick to teach you Obliviate. Professor Flitwick doesn’t seem keen to teach Obliviate to you or Talbott and instead offers to teach him some of the lessons he missed.  Fortunately Flitwick can be convinced easily.  Learn Obliviate in a 3 hour activity which requires all 5 stars to complete.