In year 5 of Harry Potter: Hogwarts Mystery the Defense Against the Dark Arts class taught by Professor Patricia Rakepick is unlocked.  Madam Rakepick should be familiar from the major role she played in “assisting” Jacob’s sibling in their quest to discover the forbidden forest cursed vault in Year 4.

Madam Rakepick was formerly the Head Curse Breaker for Gringotts Bank. She is extremely powerful and highly knowledgeable, but her motivations remain somewhat mysterious.  She will again play a large role in Year 5’s Cursed Vaults storyline as she recruits a group of students, including the Main Character, to search for the vaults against Dumbledore’s wishes.  Given the Curse placed on the Defense Against the Dark Arts teaching position, she will not likely be around for Year 6.

Defense Against the Dark Arts is similar to other classes with one of  three random mini-games being assigned after each completed star.  Players will still be tasked to trace a shape with their finger or answer a question from a classmate or Madam Rakepick herself.  However the expanding circle minigame has been replaced with a new activity which requires players to tap the the screen and keep a scroll within a designated area.  Defense Against the Dark Arts rewards the courage attribute and can be attended at your leisure. 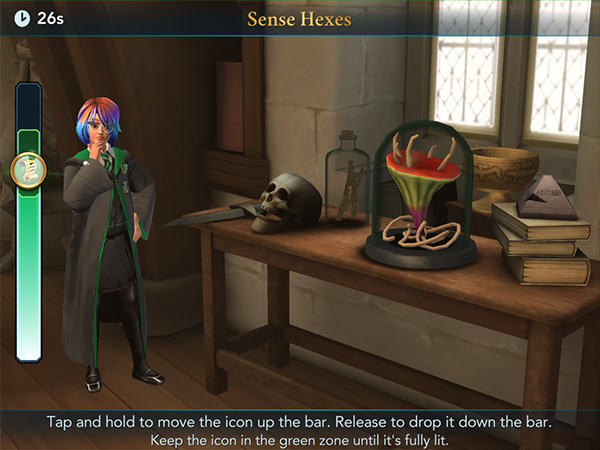 Tapping the screen will cause the scroll to move upwards, the faster you tap the quicker it will move.  You will have to tap at just the right frequency to keep the scroll within the marked area for 5 seconds.   If the scroll moves out of the marked area at any point the timer will reset.  This new mini-game is an increase in difficulty over what we’ve seen in previous classes.

We will now go over all Defense Against the Dark Arts specific questions below.  Check out our General Class Guide for a full list of questions from all classes.

Defense Against the Dark Arts Questions

What does the trip jinx cause its victim to do?
Fall Over

What is the Incantation for the Tongue-Tying Curse?
Mimblewimble

How would you best describe a Pixie’s voice?
Shrill

What do Dark Spells require in order to be successful?
Malicious Intent

What’s the term for an object imbued with a fragment of a Wizard’s soul?
Horcrux

Which curse did I fall victim to in our third year?
Sleepwalking

Which of the following is not a type of Dark Magic?
Charm

Which spell is one of the Unforgivable Curses?
Crucio

What type of Ghoul is capable of disguising itself?
Chameleon Ghouls

Which of the following is not a dark creature?
Fire Crab

What does the Impediment Jinx do?
Temporarily slows a target

Which of the following is one of the most powerful defensive charms?
Patronus Charm

Where do my parents work? (Tulip Karasu)
Department of Magical Law Enforcement

What do you need to think of in order to conjure a Patronus Charm?
A Powerful, Happy Memory