There are multiple classes available in Harry Potter: Hogwarts Mystery with each class rewarding a specific attribute.  Flying and Care of Magical Creatures will reward Courage; Herbology and Charms reward Empathy; while Potions and Transfiguration will reward Knowledge.  In Year 5 you will unlock two new classes: Defense Against the Dark Arts which rewards courage and History of Magic which rewards knowledge.

Certain classes will be required to progress the main storyline, but generally you will be free to attend whichever classes you see fit.  Our Hogwarts Mystery Class Guide will help you efficiently complete each class.

You are most likely here to find the answers to the question which can potential be asked during your Hogwarts Mystery classes.  Questions asked by the professor will generally be based on the class they teach while questions asked by fellow students tend to be more random.  We’ll cover the answers to every general question below.  Each question will have 3 multiple choice responses with only 1 being correct, answers below will be marked in green.  Check out the specific class guides for questions from the professors.

Before Dumbledore, who was the Headmaster of Hogwarts?
Armando Dippet

Who is the potions professor?
Severus Snape

Who is the Divination professor?
Professor Trelawney

Who is the History of Magic professor?
Professor Binns

Who is the Astronomy professor?
Professor Sinistra

Who is the Charms professor?
Professor Flitwick

Who is the Transfiguration professor?
Minerva McGonagall

Who is the flying instructor?
Madam Hooch

What does Professor Vector teach?
Arithmancy

Who is the conductor of the Frog Choir?
Filius Flitwick

Who is the Gamekeeper of Hogwarts?
Rubeus Hagrid

Who is the Caretaker of Hogwarts?
Filch

What is the name of Filch’s cat?
Mrs. Norris

What is the name of the Hogwarts Poltergeist?
Peeves

Professor Snape is the Head of which House?
Slytherin

Which of these words best describes Slytherin House?
Resourceful

Where are Flying Lessons held?
The Training Grounds

Where do first-years have Herbology class?
Greenhouse One

What item in the Headmaster’s Office allows you to review bottled memories?
The Pensieve

A statue of what creature marks the entrance to the Headmaster’s Office?
Gargoyle

What is another word for “Antidote”?
Cure

What type of cauldron do first-year students need?
Pewter


What kind of spell is Flipendo?
Jinx

What does the spell Fumos do?
Create Smoke

Which of these spells does not make something smaller?
Reducto

What does the lumos charm provide?
Light

Which spell has the opposite effect of Lumos?
Nox

Where are the highest quality Shrivelfigs grown?
Abyssinia

Where is Hogwarts located?
Scotland

What is the effect of the Stupefy Spell?
Stun you

What potion has Valerian Sprigs in it?
Forgetfulness Potion

Which potion does not contain Valerian Sprigs?
Polyjuice Potion

Which of the following is another dive commonly used by Seekers?
Spiral Dive

What does the Vermillious Spell make appear from the tip of the wand?
Red Sparks

What do you need to think of in order to conjure a Patronus Charm?
A Powerful, Happy Memory

What do Dark Spells require in order to be successful?
Malicious Intent

What is the name of the Wizard village near Hogwarts?
Hogsmeade

How many students sleep in each Hogwarts dormitory?
5

What spell vanishes an object?
Evanesco

What spell would you use to mend a pair of glasses?
Reparo

What is the effect of the Wideye Potion?
Keeps you awake

What is the name of America’s magical government?
MACUSA

What is a group of bowtruckles called?
Branch

What spell turns an object into stone?
Duro

What condition could be remedied by a Calming draught?
Shock

What do you say to summon a broom to your hand?
Up!

What does repairfarge do?
Undo Transfigurations

Where did Rowan Khanna grow up?
A Tree Farm

Which of these is not a cleaning spell?
Confringo

What’s the best solution to a broken nose?
Episkey

What does Colovaria do?
Changes something’s Colour

Colovaria is also known as what?
Colour Change Charm

What is the primary use of the charm Scourgify?
Cleaning

What is the Counter-Charm to Colloportus?
Alohomora

What is the incantation for the Shield Charm?
Protego

Which of these tasks can not be aided by a Vanishing Spell?
Dancing

What part of a Mandrake is potentially fatal?
Its scream

What’s the term for an object imbued with a fragment of a Wizard’s soul?
Horcrux

Which curse did I fall victim to in our third year?
Sleepwalking

Which of the following is not a type of Dark Magic?
Charm

Which spell is one of the Unforgivable Curses?
Crucio

What type of Ghoul is capable of disguising itself?
Chameleon Ghouls

Which of the following is not a dark creature?
Fire Crab

Where was Beedle the Bard born?
Yorkshire, England

When first selecting a class you will have to option to pick a 1 hour, 3 hour, or 8 hour duration. 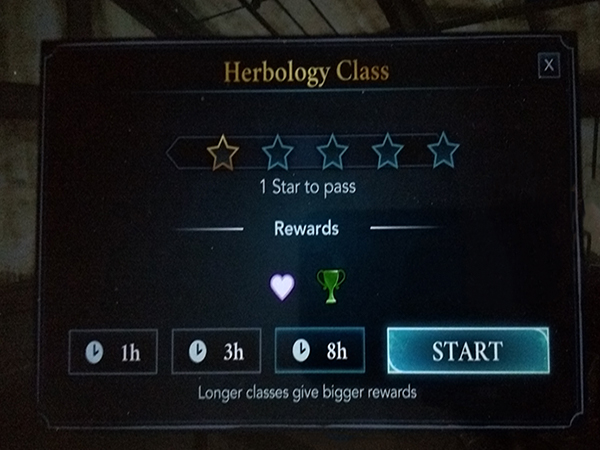 You will then use energy by tapping on various activities within the class to fill up a progress bar that is separated into breakpoints that reward a star. 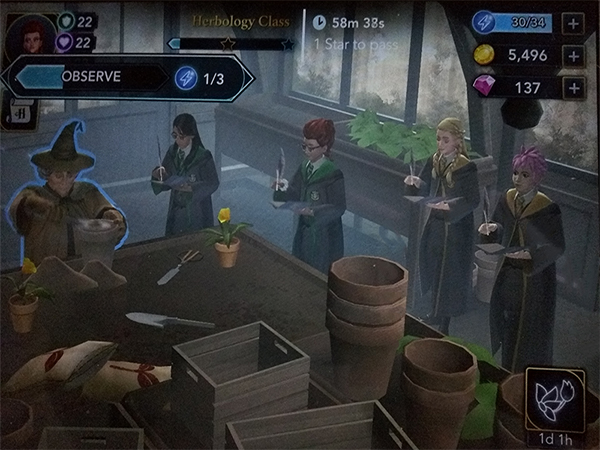 Upon spending enough energy to obtain a star you will first be given an option to choose a reward of 5-40 points towards one of the three attributes, 25-1000 gold, or occasionally 1-9 gems or energy.  Based on prices in the shop, each attribute point is worth around 8 gold.  The reward choice priority should be as follows:

With the Magizoology update up to 10 pet food can be rewarded.

Energy and Gem rewards are fairly subjective, I will not select either unless the attribute and gold rewards are extremely low.  Energy is almost never worth taking unless you are desperate to finish an activity quickly.

After this choice you will be given one of three minigames:

Stop an expanding circle within the designated area. 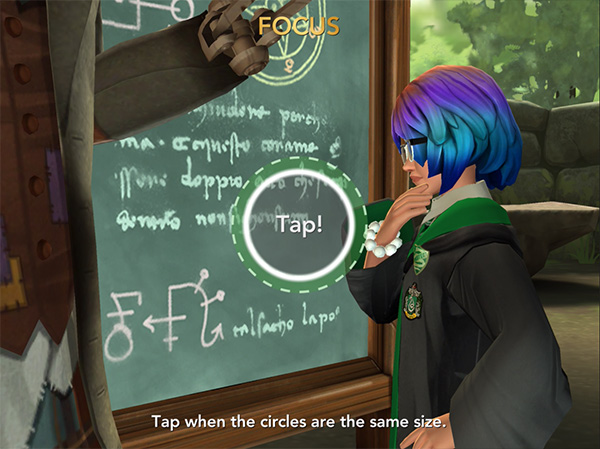 Answer a question from a teacher or fellow student.  Check out our specific class guides for answers to each question. 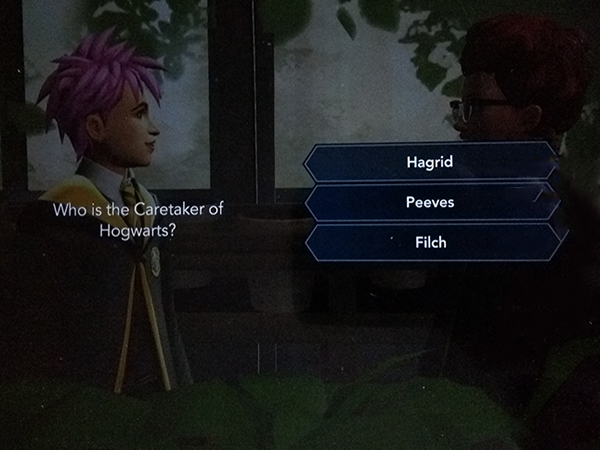 Trace a shape with your finger. 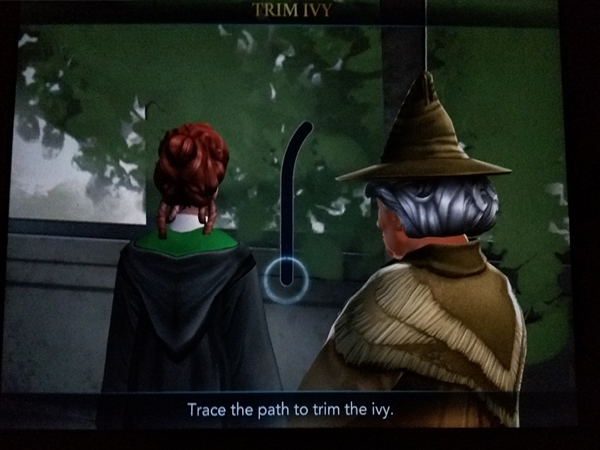 Successfully completing the minigame will reward 10 attribute points specific to the class being attended (ex. charms will always reward 10 empathy).

Finally after the time expires or all stars are filled you will receive a reward of attribute points for each star obtained: 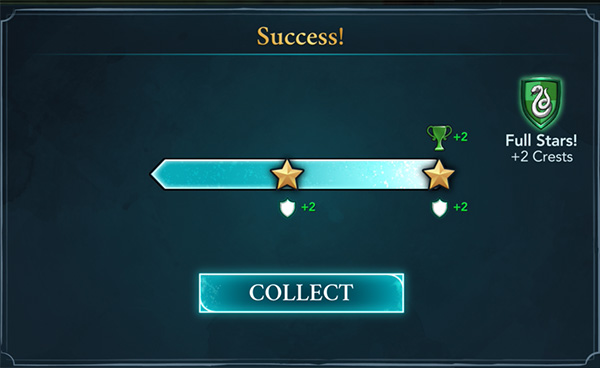 The duration of the class also effects the amount of energy required per star.  This may not be 100% accurate, but these are the values we’ve seen for each class duration:

The amount of energy required for each star is based on the activites you complete in the class.  The longer the activity the more progress you will get.  For example a single 5 energy activity will reward more overall class progress than spending 5 energy on multiple shorter activities.

If you’re looking to complete an event as quickly as possible spamming 1 hour classes will be the quickest way to receive stars.  However the 8 hour class is the most efficient in gaining power (attribute points) for your character.

Check out our Class Specific pages for more information and answers to all your class questions.