The Halloween Feast Adventure became available for players on October  17th, 2018.  It is a time limited event and rewards some special cosmetic clothing.

Be aware that you will have just over 3 days to complete all four parts of the adventure.  Each steps will be covered below. 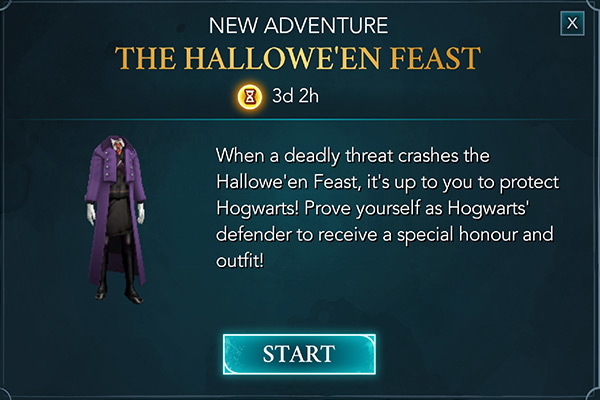 This adventure begins with Penny Haywood requesting that your character join her and the rest of your friends at the Halloween Feast.

Oddly enough Dumbledore seems to be missing and there are some strange whispers of werewolf activity.  After some searching Penny will ask if you would like her to join you in searching the courtyard.

Upon reaching the courtyard you will find a young girl who appears to be knocked out on the ground in front of 3 werewolves, including Fenrir Greyback.  Apparently she had been attempting to fight them off on her own.  If Penny accompanied you on the search she will freeze up due to a traumatic experience with werewolves in her past and your character will send her off to safety.  After some threats one of the werewolves will attack which starts a duel.  It is level 1 with 2 to all attributes, an extremely easy fight for most characters. 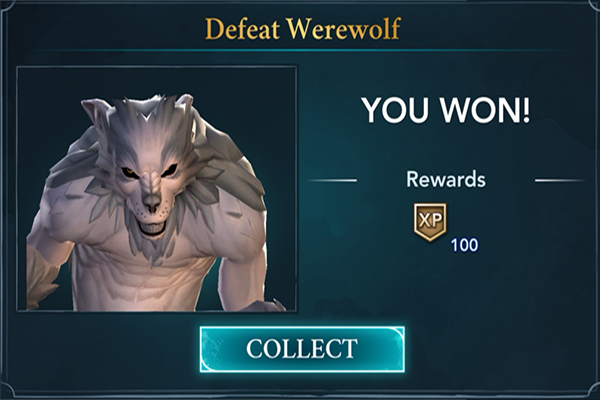 Fenrir will be somewhat impressed by your victory and demand that you join his pack.  You will have three options all of which result in refusal. 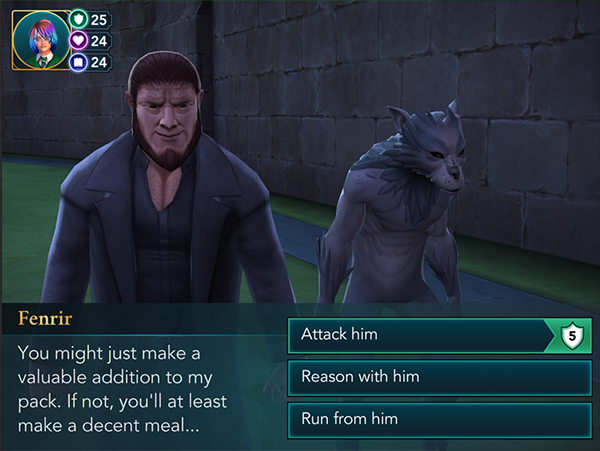 Choosing to fight him will result in your Flipendo spell being deflected.  Fortunately Dumbledore comes to your rescue in the nick of time and Fenrir runs off.

The girl, who is referred to as “Miss Lobosca”, is revealed to be completely unharmed by Dumbledore… she was likely just stunned by the werewolves.  Dumbledore will mention that a member of the Werewolf Capture Unit will be at Hogwarts shortly and may want to ask some questions.  You are then sent back to your dorm while Miss Lobosca is taken to the Hospital Wing to recover.

After some rest you will be called on by Cecil Lee from the Werewolf Capture Unit.  He appears to be a bumbling, incompetent detective with an intense hatred of werewolves.  After a short conversation a 3 hour activity which requires 5 stars to complete will become available.  Make sure you plan accordingly as a failure to gain 5 stars will require it to be repeated.

Upon completion Cecil will offer you a place in the Werewolf Capture Unit in return for you help.  He further reveals himself to be extremely prejudiced against werewolves as he believes all of them evil and deserving of death. 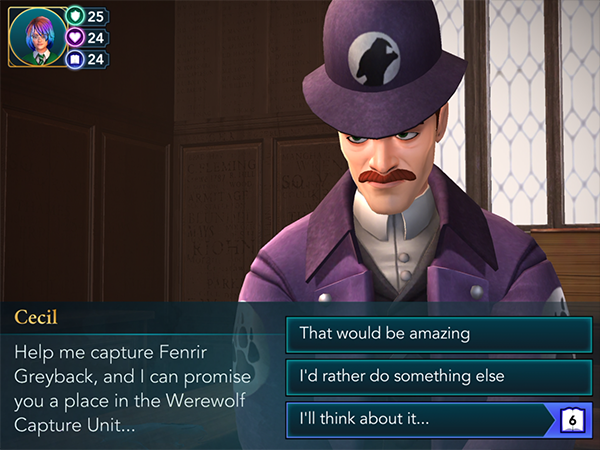 Rowan will then request to study werewolves together to better understand your adversaries.  This is another 3 hour activity, but requires only 1 out of 5 stars for completion.  If you are running low on energy from completing the previous activity it might be a good idea to only complete 1 star and allow your energy to regenerate for the next activity.

After studying Rowan will ask a difficult question. 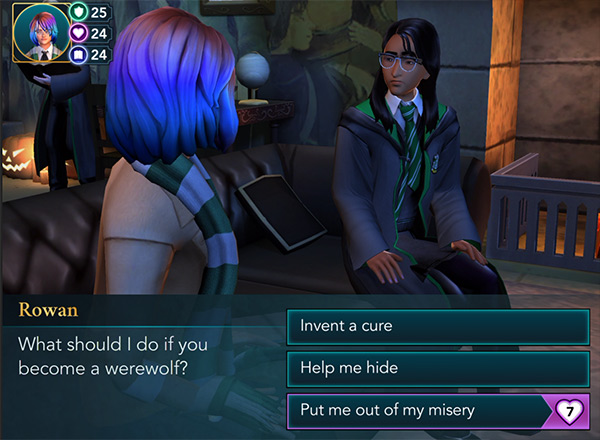 Rowan will say she won’t be able to bring herself to hurt your character, but perhaps Ismelda will.  And that’s all for Part 1, collect your 100 Gold reward and continue!

Start off Part 2 by heading to the training grounds to look for evidence.  Cecil will already be there questioning Miss Lobosca whose name is revealed to be Chiara.  You will be able to take part in the questioning, this is a 1 hour activity which requires 5 stars to finish.

Cecil continues to desire the eradication of all werewolves which appears to turn off Chiara who then asks for your thoughts are on werewolves.  She clearly believes that most Werewolves are victims and should not be judged based on  an evil creature like Fenrir.  Regardless of your stance Cecil will proceed to whisk you away to interview Madam Hooch.


Hooch is not at all pleased to see Cecil who is revealed to be related to Barnaby Lee… which actually makes perfect sense.  Eventually Hooch will acquiesce to an interview after flying class, a 3 hour activity which requires 5 stars.  Cecil then cements his incompetence by asking a series of dumb questions which only reveal that Madam Hooch enjoys pumpkin juice an hasn’t seen a werewolf on campus.

Next up is Filch who is not at all happy to see you.  After a short conversation where both Filch and Cecil insist a euphemism is a euphonium,  Filch will demand some compensation to secure his help. 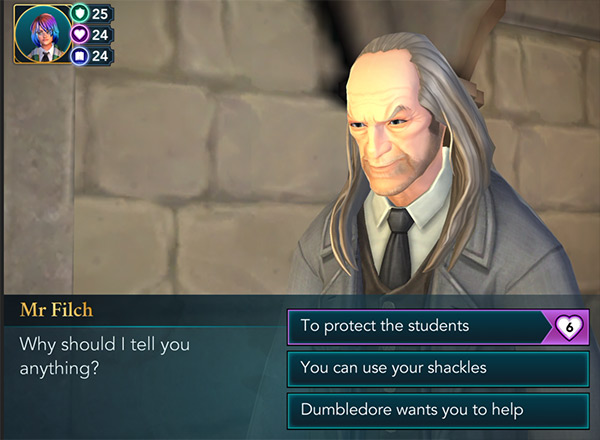 The interview will take 1 hour and require 5 stars to finish.

This interview will lead you to Professor Flitwick who supposedly knows a thing or two about werewolves, but of course you will have to attend Charms class before he will help.  This is a 3 hour activity which requires all 5 stars.

Upon finishing the class Flitwick will have a short discussion with Cecil where he reveals that he is sympathetic to werewolves and doesn’t wish to aid Cecil’s investigation.  He then poses a question to you regarding Cecil’s competence. 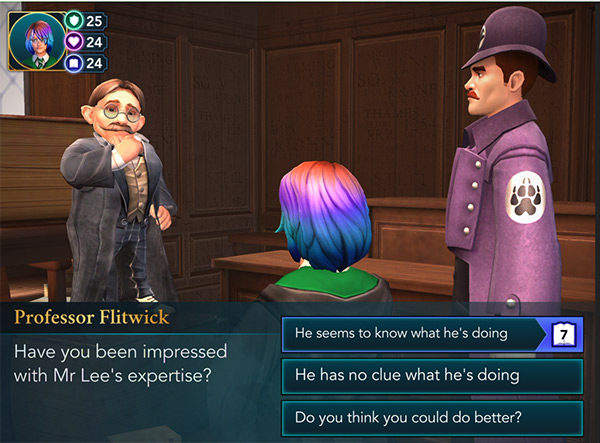 Finally you can choose to call Cecil out on his incompetence.  Unfortunately he claims that he will remember what was said to him… Perhaps there will be future ramifications in this questline?

Regardless Flitwick points you over to Hagrid and that concludes Part 2.  200 Gold will be rewarded upon completion.

Part 3 beings with meeting Hagrid in the Hogwarts Courtyard at night.  Chiara is already meeting with Hagrid, but unfortunately Cecil shows up and demands an explanation.  Hagrid hopes to show Cecil that not all werewolves are evil.  They have a wolf cub named Borf that is actaully a werewolf.  Apparently when werewolves mate under the full moon they can have wolf cubs which do not attack humans and aren’t anymore aggressive than normal wolves.  This is all explained to Cecil during a 1 hour activity which requires 5 stars to complete. 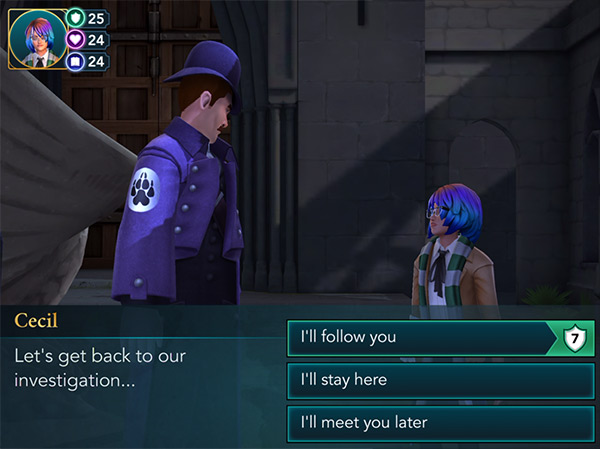 Regardless of your answer Chiara will send Cecil off on some questionable information and request that you escort her to her common room.

Apparently Chiara also has a secret to tell, meet her in the West Tower Corridor to talk. 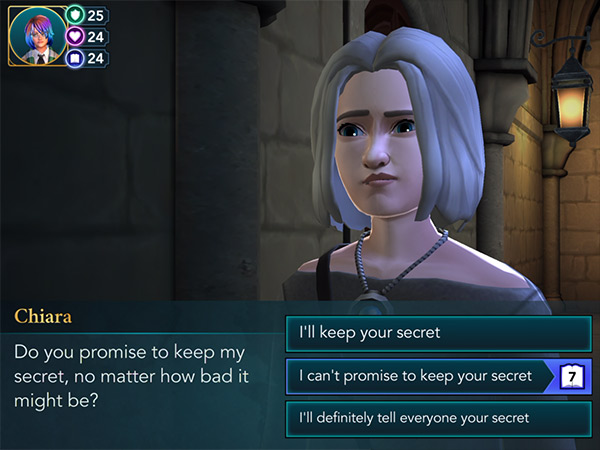 I chose the option to keep her secret, but it probably doesn’t matter what option you choose.. maybe there will be another related choice later in the adventure.  Of course we will have to complete an 8 hour activity to continue, thankfully it only requires 1 star to complete.

Chiara is revealed to be a Werewolf, bitten as a child.  She insists that she is not evil like Fenrir.  Unfortunately she’s out of ingredients for her wolfsbane potions and needs to find a potion expert to brew it for her.

Now we need to find Aconite in potions class and Rowan is around to help distract Snape.

You will have to finish potions class first, it is a 1 hour activity with 5 stars required for completion.  Afterwards Rowan will use her four notebooks of questions to keep Snape occupied while you steal some Aconite.

Now to find someone skilled enough to brew some Wolfsbane Potion…  Fortunately we happen to know a certain blonde witch who is amazing at potions.  However she might be hesitant due to her past encounters with werewolves.  We’ll see as we meet Penny in the Great Hall next…

Why do you need my help?
You’re my friend.
or
You’re brilliant with potions.

What is the potion for?
To help a friend.
or
To keep a secret.

Werewolves are my greatest fear.
I’ll make sure you’re safe.
or
This makes them less dangerous.

Unfortunately due to my attribute level I was unable to see any questions beyond the first 2.  Penny has only 5 to all attributes for this activity so even wrong answers would give me 40 points.  After some searching I managed to find another question on youtube…

Penny will agree to help brew a Wolfsbane Potion, but is still worried.  She can’t lose anyone else to werewolves. 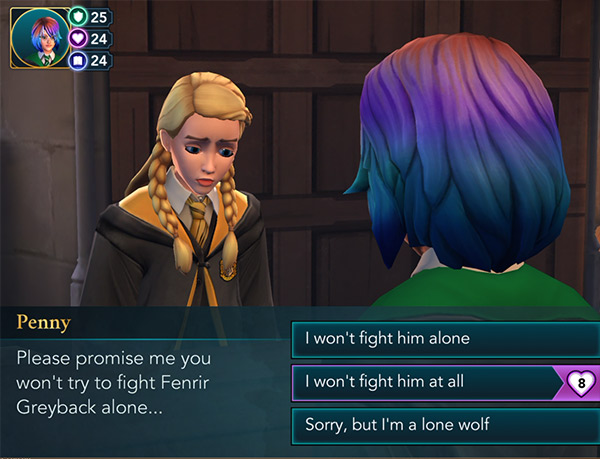 Reassure Penny and you’re done with Part 3.  You will be rewarded with a new purple Werewolf Capture Unit Hat hairstyle. 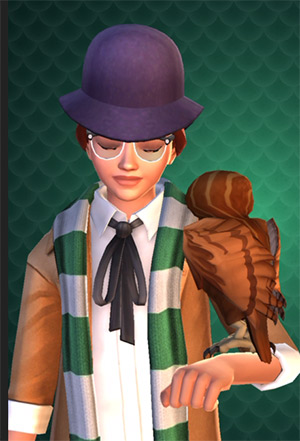 You will have to wait 5 hours before Meeting Penny and Chiara to brew the Wolfsbane Potion.  This is a good time to continue your main quest or complete a class for some attribute points.

After the 5 hour wait Penny is ready to prew the Wolfsbane Potion.  Meet her and Chiara in the Artefact Room.

Penny is surprised to learn that Chiara is actually the Werewolf.  She decides to teach Chiara to brew Wolfsbane Potion.  This is a 3 hour activity which requires all 5 stars to complete. 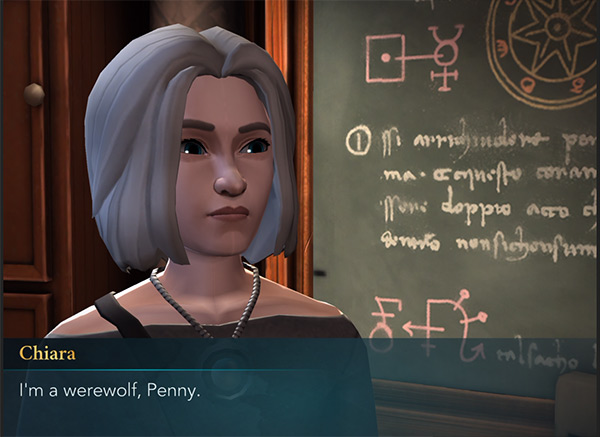 Chiara is unsure if the potion worked, but she’ll find out on the next full moon when she intends to help you battle Fenrir Greyback.  She questions how far you’ll be willing to go to stop her if the Wolfsbane potion fails to work and Chiara attempts to kill another human.

Next report to Cecil to see if he has any leads on Fenrir’s next attack.  Of course he has no useful information, but offers to teach you a spell he learned from Gilderoy Lockhart called The Homorphus Charm.  Apparently it can cure Werewolves. 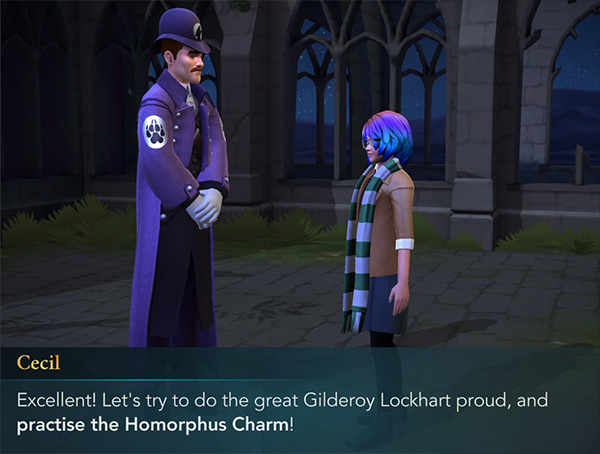 Learning the Charm will be a 3 hour activity which requires 5 stars to complete.  The Homorphus Charm actually only temporarily puts Werewolves back in human form.  It only “cures” Werewolves when cast perfectly and only Gilderoy Lockhart can cast it perfectly!

After finishing Cecil’s lesson he will ask you to cast the charm.  Unfortunately there are no Werewolves around to test it.  Just go ahead and cast it at nothing, we’ll figure out if it works later… 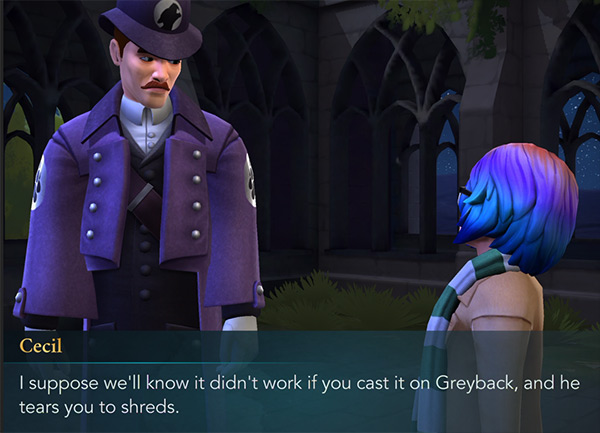 Cecil will find Fenrir Greyback a short time later.  Go ahead and confront him in the training grounds.  Cecil will attempt to cast the Homorphus Charm on Fenrir, but it will fail miserably.  Fenrir’s two lackeys will attack Cecil, leaving you to fight Fenrir 1 on 1. 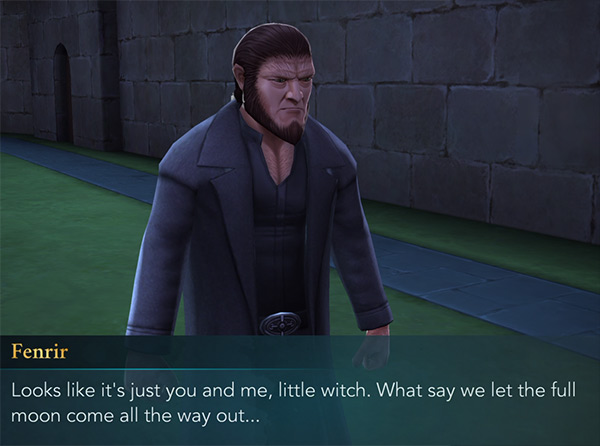 Chiara will attack Fenrir in Werewolf form, but he easily swats her away.  Now you will have to duel Fenrir.  It will cost 100 Gold to start and he has 8 Courage, 9 Empathy, and 8 Knowledge.  A very easy fight for characters who have progressed a couple years into the story.

After winning the duel Cecil will show up and cast incarcerous on Fenrir and prepare to take him into custody.  Fortunately he saw Chiara attempt to help you and offers to take her to Dumbledore’s office.  He thanks you for your help and leaves with the Werewolves. 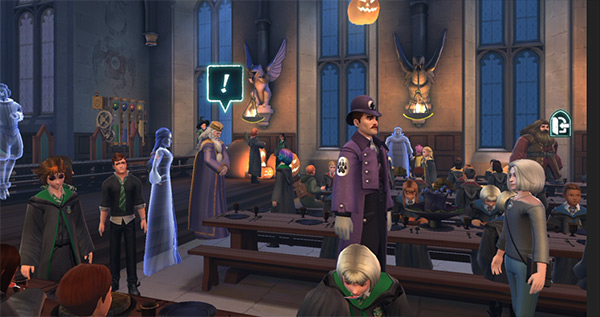 After the feast Cecil will make you an honorary member of the Werewolf Capture Unit.  Unfortunately you’ll find out that Fenrir has already escaped although most of his followers are still locked up.  At the very least it will be some time before he attempts to attack Hogwarts again.

You’ll be rewarded with the full Werewolf Capture Unit uniform pictured below:

That’s all for the Halloween Feast adventure.  More guides will be posted as new adventures become available!