In a surprise update Jam City has released a new adventure to become an Animagus, it is available starting in third year.  This is another 3 day adventure like the one we previously completed to become a prefect.  Remember to use your energy wisely! 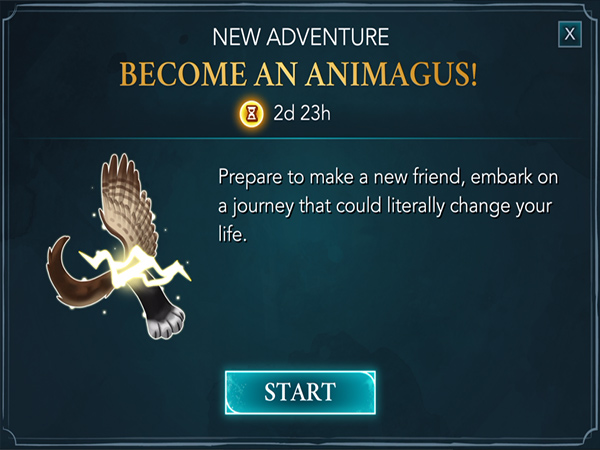 The first thing to account for is the 3 day duration, you will want to be efficient with your energy to ensure the Animagus adventure is completed on time.  Don’t stress too much though, the prefect adventure was easily finished by  casual players with limited time and this adventure should be no different.  It appears to have four parts and will result in learning to become an animal.  Each step will be covered below.

You will start off by traveling to the Great Hall where you will find Tulip Karasu and Barnaby Lee talking together.  After a short conversation Tulip will mention a reclusive student named Talbot Winger who is secretly brewing a potion to become an Animagus.  After your character expresses interest Tulip will want to know your reasons for wanting to learn the ability. 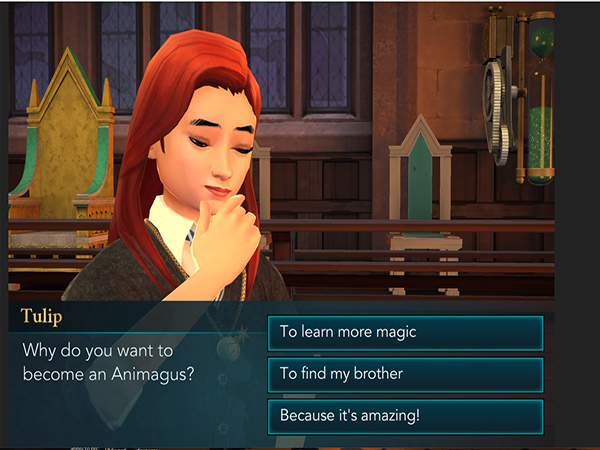 After you answer her the first activity will start…

This is a 1 hour activity that requires 5 stars to complete at 5 energy per star.  You will be speaking to various students and faculty members to gather more information on Talbott Winger. 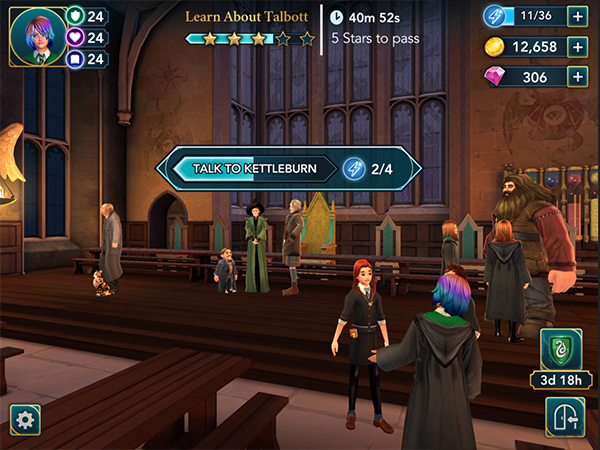 Upon completion Talbott himself will approach you with a request….

Break into Filch’s office and Talbott will admit he needs the Chrysalis of a particular type of moth for the Animagus potion a secret friend is helping him brew.  Filch has conveniently just confiscated some from another student so you will need to find and steal it. This is a 3 hour mission which requires 5 stars to complete.  You will likely have to take a break here for your energy to regenerate. 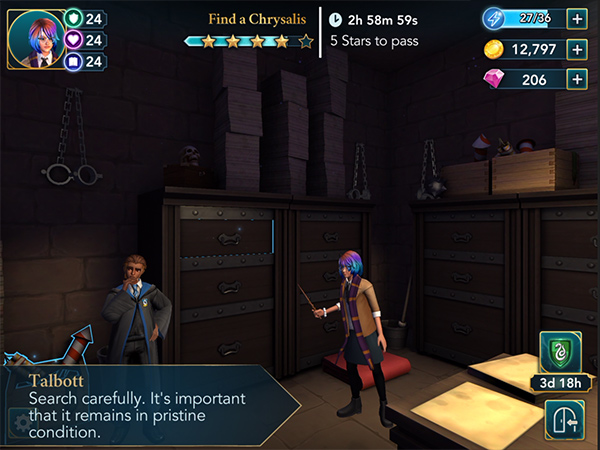 I decided to spent some Gems on energy.  Don’t do it, it’s not worth.  Anyways after some searching your character will find the chrysalis of a “Death’s-Head Hawk Moth“.  Talbott will be pleased and mention the next objective of collecting Dew from the Artefact Room.

The Dew must be collected in a place untouched by sunlight and human feet for seven days.  Apparently that only exists in the Artefact Room.  This will be another 3 hour mission that requires 5 stars to complete. 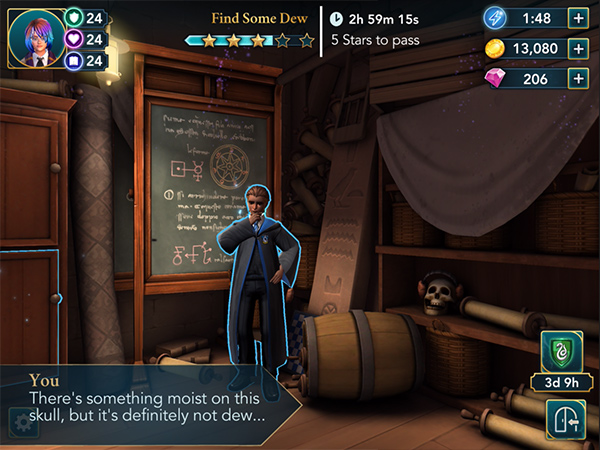 After Talbott gets his spoonful of Dew he will mention the next objective: Mandrake Leaf from Herbology which is the last ingredient for the Animagus potion.

Upon meeting up in Herbology, Talbott wil admit the secret friend helping him is none other than Penny Haywood. 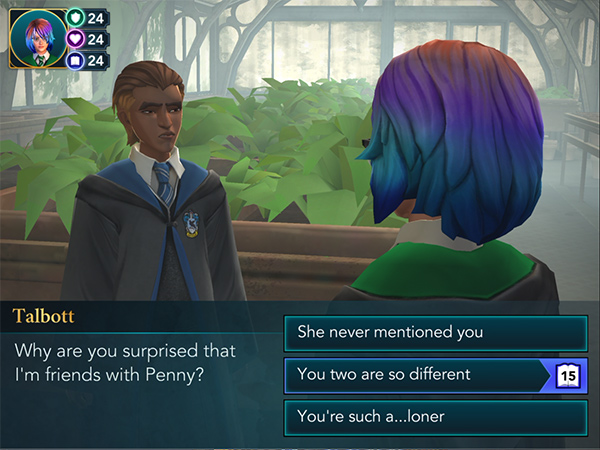 Unfortunately this activity does not count as a class, so you will receive no rewards after reaching each star aside from the 50 gold completion reward.  It is another 3 hour duration 5 star requirement activity. 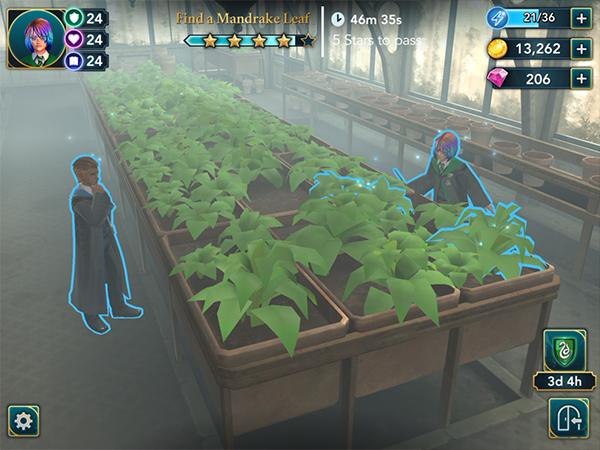 Earn all the stars and your character will find a Mandrake Leaf.  This completes Part 1 of the Animagus Adventure, you will be rewarded with 500 gold.

Go to the library to meet with Penny, Rowan, Tonks, and Talbott.  There you will hand over the collected ingredients to Penny and study the Animagus Potion as a group.  This is yet another 3 hour activity that requires all 5 stars to complete. 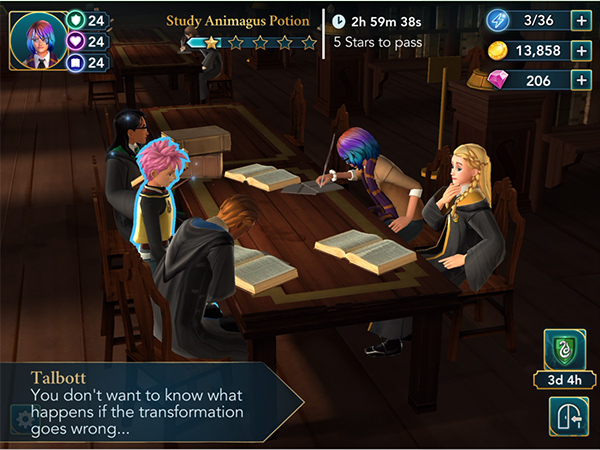 Upon completion Penny will give you some instructions and make plans to meet during the next full moon. 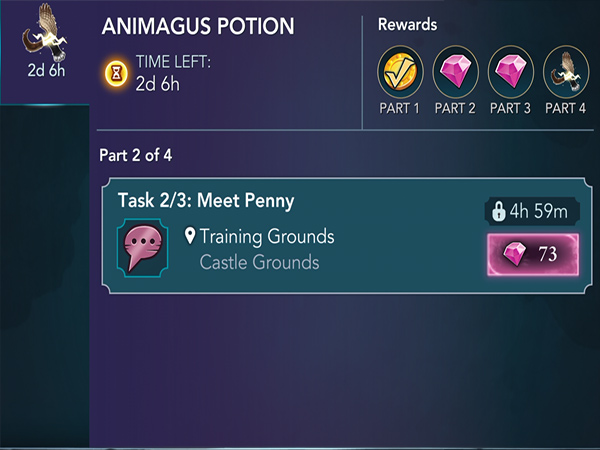 Turns out there is a forced 5 hour wait time before the next step can be started.  I guess we’re waiting for the next “full moon”.  This should be a good time to regenerate some energy, maybe do a quick 1 hour class if you’re still looking to progress the Hogwarts Rocks!  event.

After a “month”(5 hours) has passed and the full moon is visible again Penny will be ready for you in the courtyard.  There she will take the mandrake leaf that’s been in your character’s mouth for the past month and combine it with the rest of the ingredients.  Afterwards she asks to meet in the potions class room.

At potions class Penny reveals that the potion must be consumed during the next electrical storm, which I assume will conveniently be happening soon.  The potion will have to be stored in potions class until that time.  Now search the potions classroom for a place to hide the Animagus potion.  This is another 3 hour activity that requires all 5 stars to complete. 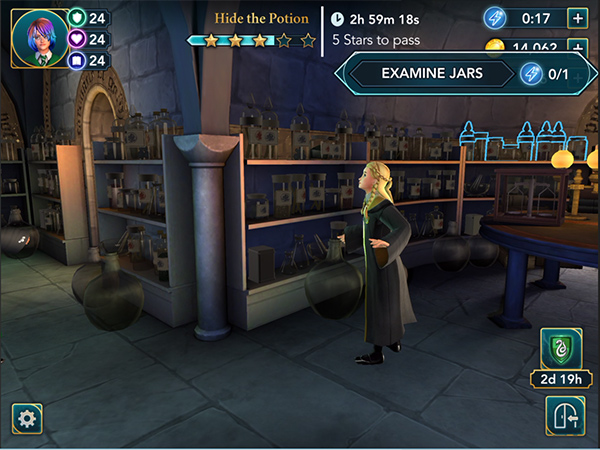 After finding a suitable hiding place, Penny will direct you to Talbott who will teach a special Animagus Spell.  This completes Part 2 of your Animagus quest and you will be rewarded with a whopping 5 gems.

Talbott is still elusive about his past, but he plans to quickly teach you the Animagus Spell before the next storm.  This is an 8 hour activity that requires all 5 stars to complete, so plan accordingly. 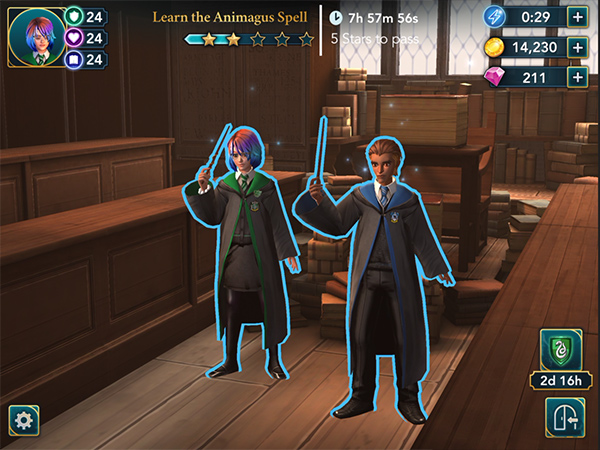 Complete the stars to learn the spell and cast it on yourself.  This leads to the next step.

Second Activity: Meet with McGonagall to discuss the merits of becoming an Animagus.

This is a 3 hour activity which requires 5 stars to pass.  Upon completion it is revealed that Talbott is an unregistered Animagus.  With his secret revealed, Talbott offers to meet in the Courtyard to explain himself.

Talbott will ask which type of animal you wish to become.  This may have an effect on your Animagus form.  The quest has a picture of what appears to be a phoenix… I’ll just choose cat and see what happens. 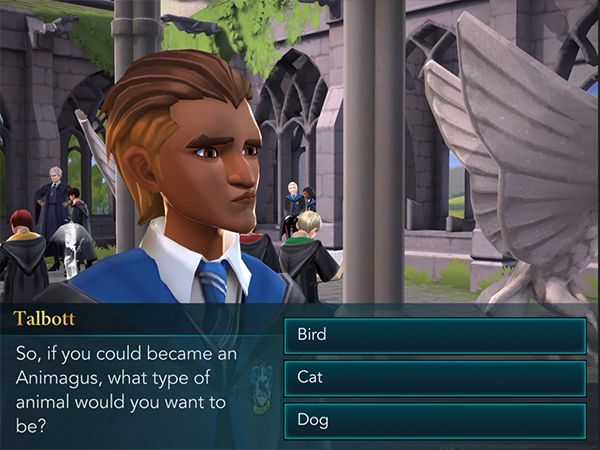 Then he offers to tell his story if you can defeat him at gobstones. 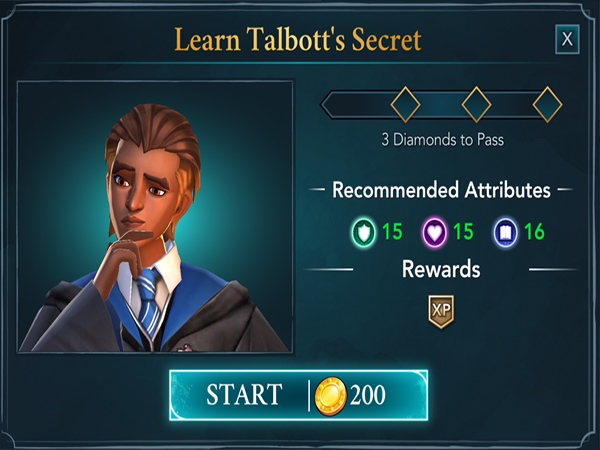 Distract Talbott to win at Gobstones.  Answers are as follows:

Let’s play Gobstones!
This is actually Wizard’s Chess.
or
Try not to get too distracted

Don’t try to distract me…
Penny secretly hates you.
or
When did you meet Penny?

How do you like Gobstones?
I eat Gobstones for breakfast.
or
I find it distracting.

Apparently a massive electrical storm is coming, you’ll have to quickly finish potions class and grab the potion.  Thankfully this is an actual potions class which gives rewards with each star earned.  Only 1 star is required for completion over the 3 hour duration.

Get to the Courtyard before the Electrical Storm hits.  Penny will want to discuss exactly what should be done.  This is an 8 hour activity that requires all 5 stars to complete. 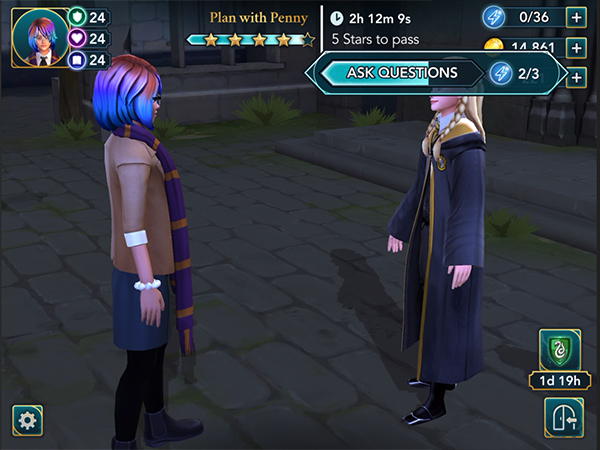 Complete this activity and you will have your shiny new Animagus form!  There will be one final chance to select between Bird, Cat, and Dog. 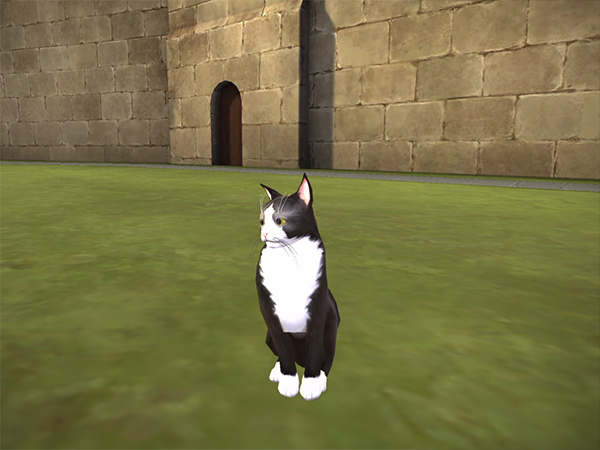 This is the Cat Animagus form that I selected.  There is only one skin and it is not customizable at this time.  I finished the Adventure with around 22 hours left and I did spent 100 gems on energy.  This one took longer than the Prefect Adventure, but it should still be easily completed by a free to play player.  Good luck!